An exhibition of artists’ reactions to wars–all wars–is on view in the small but beautiful gallery at the Nick Salazar Center for the Arts, Northern New Mexico College in Española. The show’s presence in that historic town north of Santa Fe and south of Taos reflects the high toll wars have on small communities all across the nation.  Proportionately, the losses and the survivors’ stories of suffering hit these small communities harder. Nearly half the soldiers who fought the Iraq War, for example, came from communities (like Española) with populations under 25,000 (NPR “Morning Edition Feb. 20, 2007)

“After War: How War Affects Community” is curated by Sabra Moore as part of a series of exhibitions entitled “Visible Confluences. Moore wanted to include the notion of “all wars,” despite the show’s small size. Films by Cynthia Jeanette Gomez, David Lindblom, and Daniel Valerio express the experiences of the descendants of Genizaros (Native American slaves who often won their freedom fighting on the frontier). Julie Wagner shows a 60-year-old Japanese album full of ink drawings referencing aftermath of Hiroshima, and replicas of those drawings. 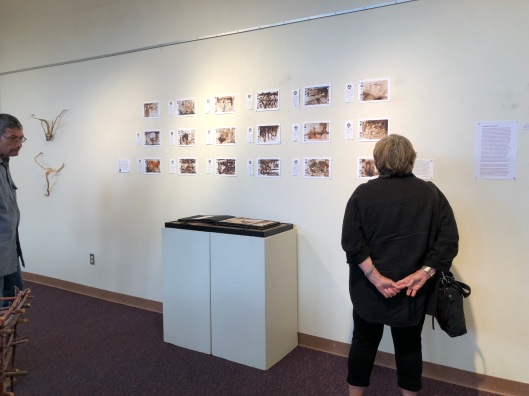 Margaret Randell’s photos show citizens visiting the Vietnam Veterans Memorial in Washington D.C. to find the names of those lost, and Nicolas Herrara paints about military experiences during the Iraq War. Moore herself shows multivalent works in the form of houses or boxes that tell stories. Norma Navarro weaves fiber art to convey the tearing apart and reweaving of communities. And Dana Chodzko shows twisted branches that poetically express the effects of PTSD, the result of any war. 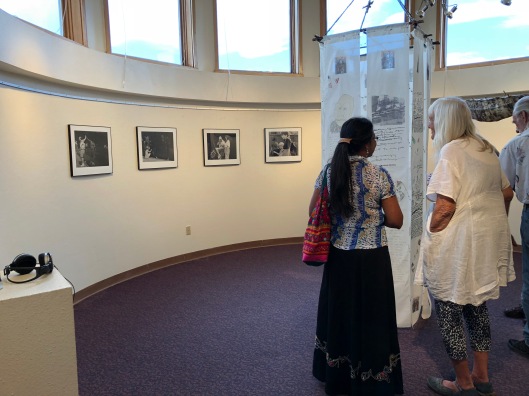 NNMC Gallery view showing Moore’s “How Do We Get Out of the Box” (front: cedar poles and mixed media, 2005); on wall: Nicolas Herrera’s “The Eye of the World” (2003) and Dana Chodzko’s wall sculptures made of roots and branches.

The exhibition went up August 24 and can be viewed through September 21, 2018.

Revised “Hyperdressing” essay will be published in the catalog for the great new exhibition “Fear and Love: Reactions to a Complex World,” opening at the new quarters for The Design Msueum on November 24.

I was happy to see this wearable tech at in Vancouver. #ISEA2015

Electric heart allows wearer to display & enjoy the heartbeat of a distant beloved.

Wish there had been more wearable tech at the conference.

At the Lively Objects Opening, Museum of Vancouver @ISEA2015 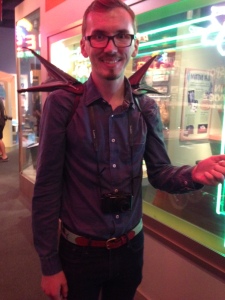 It was worn by Boris Kourtoukov of the Social Body Lab http://socialbodylab.com

Monarch is a harness with wing-like shoulder enhancements that render the wearer more fearsome. The structures expand and contract in response to sensors on the arm reading muscle movement so they mimic a “fight or flight” posturing.  It is an example of an expressive wearable that addresses human interactions and public display, not just (like so much wearable tech) online communication and consumption.

Posted by faryan | Filed under Events

On Sunday I’ll be delivering a short version of the longer paper, found here

Her talk: Quantified Threads: Future Fashion in the Cloud 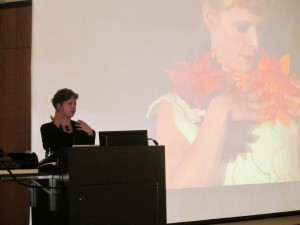 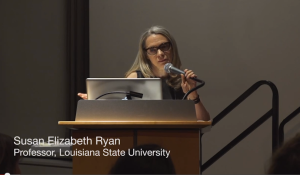 I’ll be part of the Leonardo Panel “Navigating the Digital Divide” at 5:30 PM Thursday, February 12 at the Hilton in New York, Part of the College Art Association Annual Meeting.

See description of the panel at: