The “City Different’s” folk art museum on Museum Hill is a popular destination. Its rooms are chock full of materials affording colors, textures, craft techniques, and little narratives in dioramas and retablos with amazing detail. The cornucopia of collectibles is partly due to the fact that the museum is the repository of the massive “folk art” collections of “mid-century modern” designer Alexander Girard, who designed the display of his collection in the museum as a labyrinthine, near immersive experience.

Important as that is, that exhibition does not solely represent the mission of the museum. One can understand the dilemma: the modern-era concept of “folk art” is a colonializing one, something that Girard, from his mid-century viewpoint, probably could not appreciate. For all the brilliance of the designer–and the museum also has an exhibition of his own career from his days as head of Textile Design for Herman Miller to his work as house designer for Braniff Airways–his interest in dolls and parades and their paraphernalia supports what today might be considered a somewhat infantalizing, old-school approach to “other cultures.”

But the museum is also a member of the International Coalition of Sites of Conscience (www.sitesofconscience.org), a network of global sites, institutions, and memory initiatives that “connect past struggles with today’s movements for human rights.” For many indigenous cultures–historically those cultures provide us with the authentic, craft-intensive folk art that everyone loves–are also cultures that have been marginalized or even under erasure by rapidly urbanizing nations in what we used to call the “third world.”

The Museum of International Folk Art has several other small exhibitions that support a recognizable global trend on the part of formerly oppressed people, or people forcibly assimilated to the demands of economic development and modern urban environments, to reclaim their original crafts as forms of resistance.

An example is the exhibition, “Crafting Memory: The Art of Community in Peru,” which focuses on the plight of migrants: people forced for economic. political, or environmental reasons to leave their ancestral communities and who are denigrated in the city. For example, the signature Peruvian wool hat called the chulla and the full skirts called polleras typify traditional dress that stigmatized their wearers, who were derided as “chola” or “cholo,” an ethnic slur. Qarla Quispe, a young artist working in Lima, creates defiant polleras from potato sacks or prints with contemporary graphics to tell the stories of the wearer’s family. She is part of a movement of artists who mix old cultural traditions with new. They are paired in the museum with T-shirts by Peruvian

collective AMAPOLAY, which combines urban immigrant street graphics with motifs from the Andean highlands, a mixture of tribal and urban called chicha (from the popular music style named for a type of beer). The shirts raise awareness regarding the plight of migrant cultures.

The chullo, the colorful knitted hat with ear flaps worn by young men who reach maturity in the Andes is revived by Aymar Ccopacatty, an Aymara artist, who knits a gargantuan version out of the plastic bags that litter Peruvian cities today–a critique

of the consequences of modernization. The chullo were individually crafted by fathers for their sons and became part of their identity, but also became a symbol of migrants’ tribal origins that helped make them targets. The late twentieth century saw violent cultural changes in Peru during the twenty-year conflict between the military and paramilitary, and the forces of the Maoist Shining Path. Towns were decimated across the map and the particular victims were the rural poor. More than 70,000 inhabitants disappeared. One story has it that the chullo could help a grieving family identify a body otherwise too disfigured or decayed. The refuse plastic fabric of Ccopacatty’s sculpture reflects that history but also speaks of the disfigurement of traditional ways of life and the deterioration of the Peruvian land. 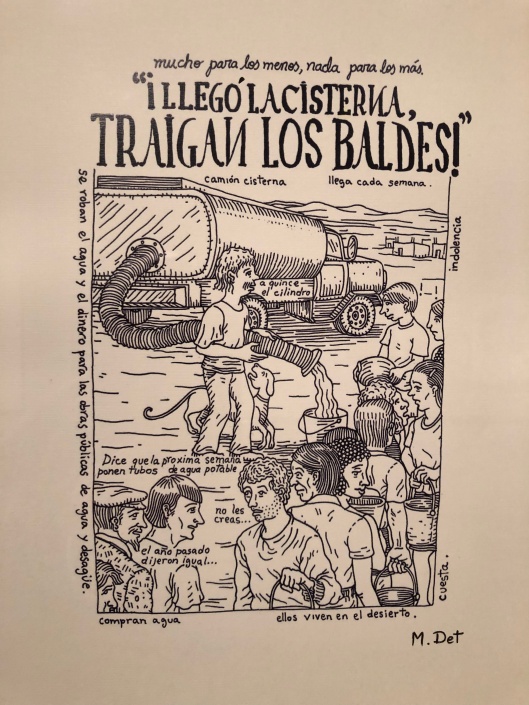